I don't know if people noticed (tbh, I thought everyone know it, already) but... there's an announcement from Koe Koi official twitter that the episode 6 (supposed to be aired in August 12th) is postponed to August 19th. Thus being said, yes, it's not aired yet. So (again) it's useless to shout where is the sub and where is the raw files tbh, I find it pretty amusing and laughable. lol

As Additional Info: the clean version for both episode 4 and 5 still not available yet, either.

Well, doramax265 upload the chi-jp hardsub version again for awhile and apparently I can use those for subbing since the resolution is decent enough. Just (like I said on episode 4) it's a bit distracting to see 3 different language on one video. Those who can't wait for the clean version can download the sub for episode 5 here. ^^/

Let's pray the DoA clean version will be up in no time.

For the impatient and those who doesn't have a problem as long as you can watch it, you can download the sub for episode 4 timed to doramax265 version here. As you can see in their notes, it's still a chi-jp hardsubbed version so... yep, it's a bit distracting but watchable.

FYI, the clean version from DoA isn't available yet. :\ I'll release the fixed subs for clean version later. Hopefully, it will be up together with episode 5. 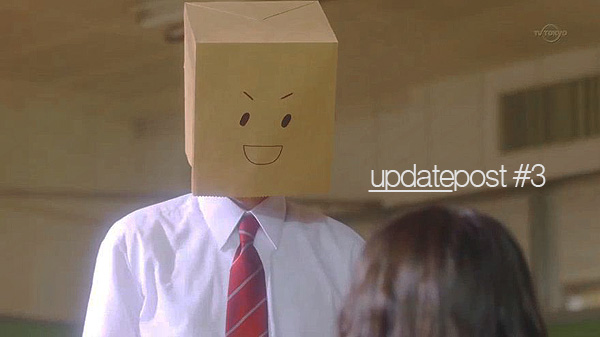 Too little kaichou this week. I need my weekly dose of Ryusei while waiting for Kenja no Ai. T_T Well, more importantly, please let me rant a little here. Some streaming sites got my subs on their web and FYI those are there without my permission. I can say that it's stealing but since I'm not using any locked post or password, didn't write any warnings or credit inside my subs, etc, maybe I'm at fault too? I thought it's common sense that if you are using others work you must ask for their permission first?

Currently, there's only two person who kindly ask me to use my sub and re-translate them into Indonesian and French (thank you for that) but there's also someone out there saying that we release this sub lol I worked solo on this project, btw. From timing, styling, translating and even uploading it. I don't remember any we other than a friend who QC by watching it as whole episode together with me when I finished every episode and she's not the one who said we release this sub.

It became a long rant, sorry lol I'm not that angry to the point of wanting to stop subbing. I just need to let it out somewhere. XD 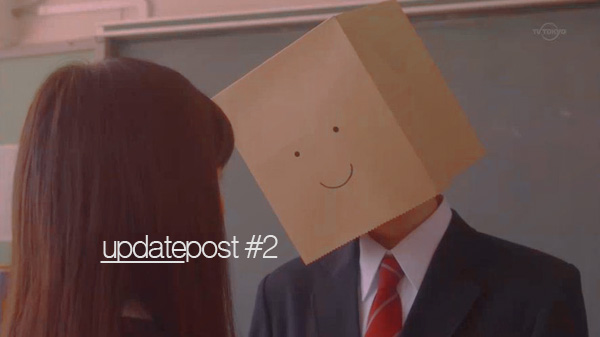 How can a guy with paper bag looks super cute? T_T and there's a lot of Kaichou in this episode, I'm happy even if his choice of words are a bit confusing. Btw, thanks for the adds and comments! :D for those who are using 480p and DoA version, please tell me if they sync or not so I can add the info on master post. 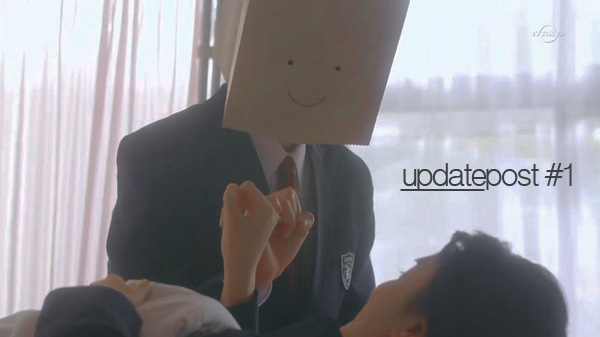 In addition, I decided to put subtitle on d-addicts as well :D I will keep uploading here in livejournal so in case you want to watch it but d-addicts went down or anything, you can still found it here. It's for my personal database, too. 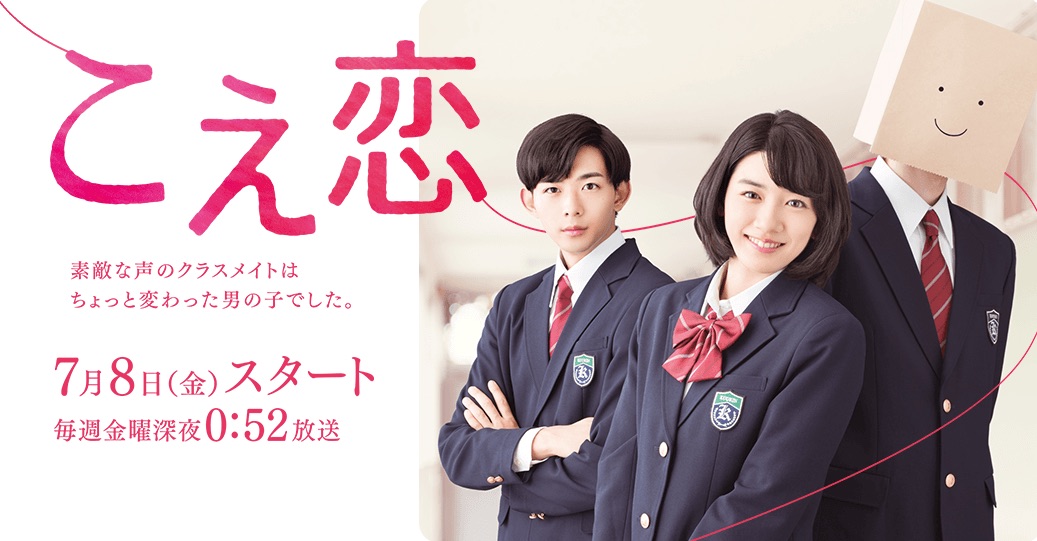 Synopsis: Yuiko Yoshioka (Nagano Mei) begins the first grade in high school. She gets sick with the cold and stays in bed. At that time, she gets a phone call from class president Matsubara (voiced by Sakurai Takahiro). Yuiko becomes fluttered by his kind voice on the phone. The next day, she goes to school and meets Matsubara. He is a mysterious boy, wearing a paper bag over his head. Her high school days begin with pounding heart.

Drama Note:
1. Kagaya Yuichi (Ochiai Motoki) call Matsubara-kun "Macchan" and since "Macchan" and "Ma-chan" is different in Japanese pronunciation, I decided to keep it as the original. The same with Nishizono Aki (Otomo Karen) who call Yuiko as "Yukko" this is not a typo or Yuiko has another name or else lol it's basically something like a nickname.

3. The same with Kaichou, I will type brother and Onii-san according to it's context. In the future, Otou-san and Okaa-san might also be like that. 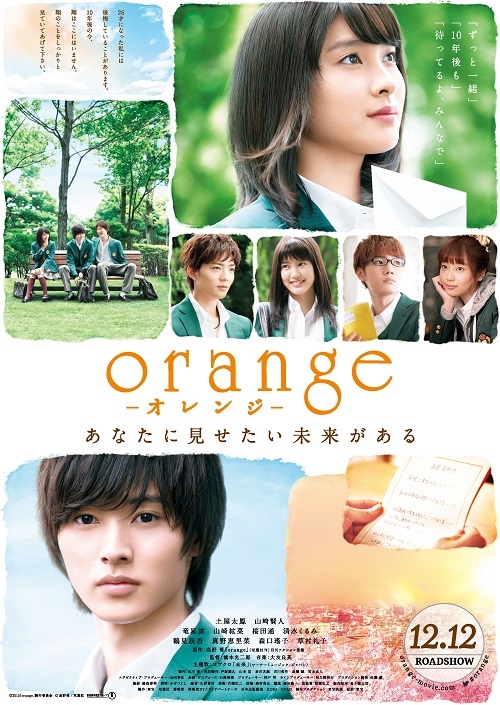 Since it's been obvious how much I love Ryusei Ryo recently, I made this XD

I know there's English subtitle available out there from like... 2 days after I saw this movie available online (that was fast, as expected for such a long-waited movie) but since I'm still doing this anyway, I'll put my version here. I guarantee there's no stealing or anything from the other subber (you may check the timings cut or anything, I made them from raw) but I need to say that I get some part from reading the manga online so I'm using manga translation as reference 'tho a lot of dialogue were different from manga so of course I can't just copy-paste the manga into this sub lol

I enjoyed this very, very much and I cried the whole subbing process. I love the cast, the plot flow, the way they made one of my favorite manga feels alive with all the beautiful things in it T_T a must watch.

Next, let's wait for Suwa and Hagita reunion in Koe Koi as summer season comes! Yes, of course, I'm interested in subbing that if the japanese subs are available. 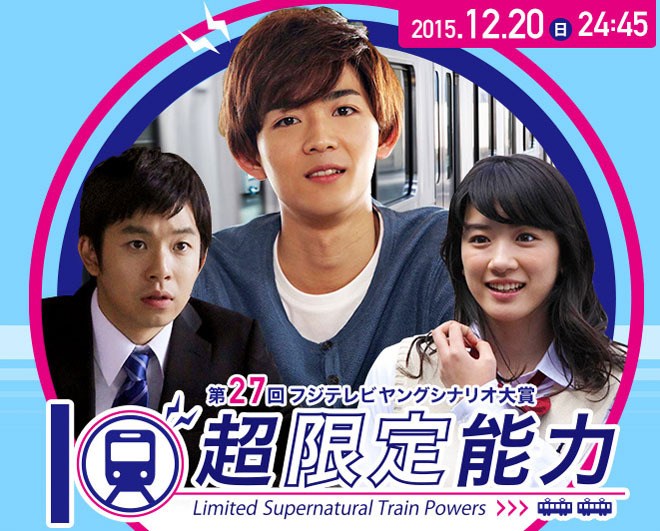 Cast: Ryusei Ryo, Taiga, Nagano Mei, Lou Oshiba, Dandy Sakano, Muto Keiji, Konno Mahiru
Synopsis: Akiyama Shuntaro (Ryusei Ryo), a fourth year university student who attends a third-rate university in Tokyo, has had a good upbringing and skillfully overcomes everything with his tact and charm. Because his father is a member of the board of a well-known company, Shuntaro’s employment has somehow or other been determined with those connections and he spends his days aimlessly. Even though he questions his present way of life, he has not taken any constructive action. He just has to get course credits in order to graduate and commutes to university in crowded trains some days. While on the way to school one day, Shuntaro hits his head inside the train and loses consciousness. When he becomes aware of his surroundings, he can see characters showing train station names in commuters’ heads. He soon realises that these are the stations that those commuters are alighting at. (more info)

Hi, back with another sub! XD

Like I said in Sumika Sumire post, I'm doing this mainly for learning Japanese language the active (?) way so this time I'm trying to sub some SP with Ryusei Ryo as motivation. For info, this SP doesn't have Japanese subtitle that I can use as reference like when I do Sumika Sumire >_<;; so there will definitely some mistakes. Maybe I'm not hearing some part correctly, and maybe I assume a different meaning since without it's kanji, Japanese words can be confusing with their similarities. Feel free to tell me if you found any. Enjoy! 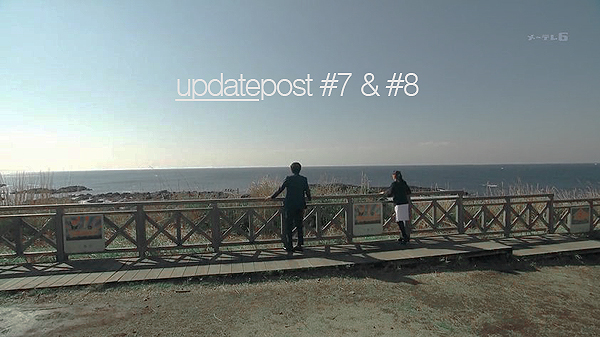 My first completed project! Well, I do hope I can do another subbing but I think I'll consider older drama. One that no one take after years, maybe. One with my current obsession like Ryusei Ryo, Takahashi Issei, Kubota Masataka, etc, of course.

Anyway, thanks for all who give me comment and add me as friend from the beginning of my first subbing project XD hope you enjoy this drama as much as I do.
Collapse